The number of drugs which are being used in medical practice which  can cause hyperkalemia has increased, specially since it was realised that captopril could protect renal function even without reducing the blood pressure. These drugs affect the RAAS (renin angiotensin aldosterone system). This system helps regulate renal, cardiac, and vascular physiology, and its activation is central to many common pathologic conditions including hypertension, heart failure, and renal disease. Hyperkalemia is a natural outcome of the use of these drugs.

The classical (historical) view of the RAS pathway begins with renin cleaving its substrate, angiotensinogen (AGT), to produce the inactive peptide, angiotensin I, which is then converted to angiotensin II by endothelial angiotensin-converting enzyme (ACE). ACE activation of angiotensin II occurs most extensively in the lung. Angiotensin II mediates vasoconstriction as well as aldosterone release from the adrenal gland, resulting in sodium retention and increased blood pressure.

Since normally we do not ingest chloride by itself  it is sodium intake clinically which appears to regulate the RAAS. A low sodium intake (or sodium and water losses from any site) leads to a reduction in extracellular fluid volume and stimulation of renin secretion. Acute increases in renin secretion, such as those occurring with hypovolemia, primarily reflect the release of preformed renin from intracellular secretory granules. Chronic, persistent stimuli to renin release lead to increased synthesis of new prorenin and renin.

In pregnant women and in women taking oral contraceptive the PRA level may be higher than PRC levels. Measurements were made in hypertension in an attempt to define groups with high renin activity and low renin activity in order to better regulate therapy but the variations in the measurements did not yield accurate results. Hence measuring these values does not add much to the evaluation of  essential hypertension and are more useful if primary aldosteronism is suspected.

The drugs used to inhibit the RAAS are: angiotensin converting enzyme inhibitors ACE-I like captopril, enalapril, lisinopril etc, angiotensin receptor blocking agents or ARBs like losartan, irbesartan, valsartan etc and mineralocorticoid receptor antagonists or MRAs like spironolactone.  Aliskiren (the sole available renin inhibitor) is effective and safe as a single antihypertensive agent, it should not be combined with an ACE inhibitor or ARB

Whether or not to block the RAS is no longer the appropriate question in the clinical scenarios of diabetic nephropathy, chronic kidney disease, and heart failure. Efforts are dedicated to answering how best to optimize blockade. Discoveries of new peptides, enzymes, receptors, and cell-signaling targets of the system are changing our understanding of physiology and providing potential new therapeutic targets.

How often are you likely to encounter hyperkalemia?

When should you worry or take action? A cardiologist will start decremental reduction in ACE-I, ARBs and MRAs at levels above 5 Eq/l. A nephrologist will probably push his/her luck to 5.5 or even 6, but will then stop the drugs. If you look at the slide given below i.e. the PARADIGM heart failure trial you will notice that the exclusion criteria included a serum potassium of 5.2 mEq/l at screening and 5.4 mEq/l at randomisation and an eGFR below 30ml/min/1.73 sq meter. 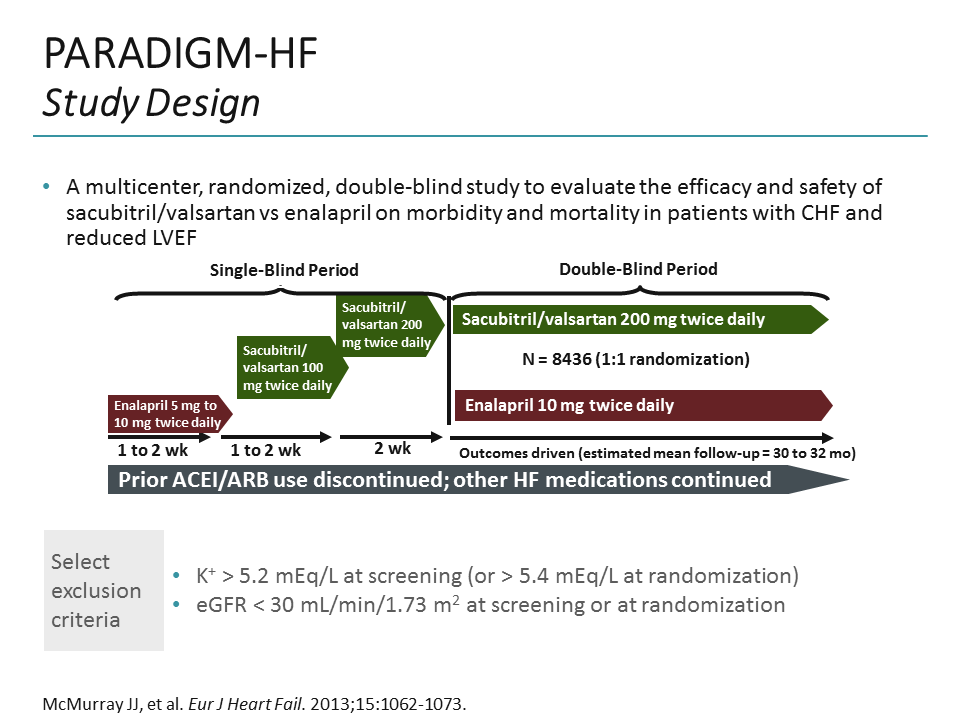 This should make you understand very firmly that any CKD patient in Stage 3b should not be receiving these drugs as the risk of death from hyperkalemia is too high to counter any potential benefit. Also the ACEi and ARBs reduce the GFR because they reduce the intraglomerular pressure. A drug which is being used to reduce proteinuria in order to ensure that the decline in the GFR is halted is of no use if it is causing the decline itself. 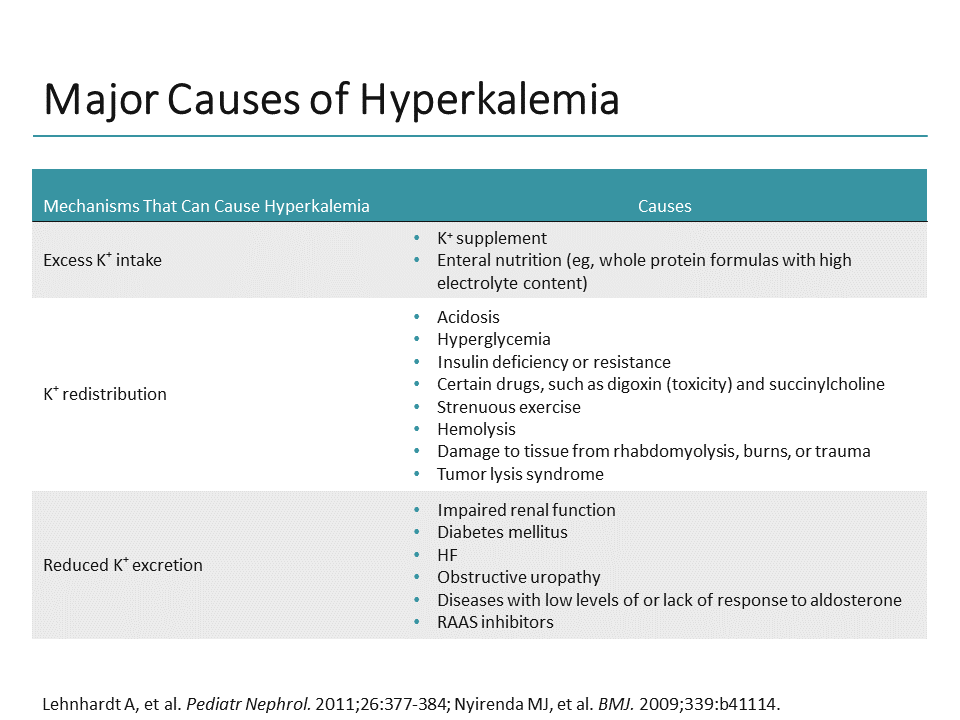 Why does hyperkalemia occur in heart failure?

As the cardiac output declines the blood flow to the kidney is also reduced, causing a decline in the GFR. Thus less K is eliminated through the kidney. Patients with HF tend to behave as if they are in the pre-renal stage of renal failure. The sodium filtered through the glomerulus is absorbed in the proximal tubule so less remains for exchange for hydrogen ion and potassium which is mediated by aldosterone. This is further complicated by the fact patients are on RAAS inhibiting drugs and on diuretics which deplete the volume. Patients on dialysis are better able to handle potassium because of remaining healthy glomeruli. Remember that in CKD the nephron in which the glomerulus is sclerosed does not function at all but the nephron with a functioning glomerulus works normally.

In diabetes there is reduced renal function because of damage to the glomerular basement membrane caused by proteinuria, the patient may be on RAAS inhibiting drugs and may also be in heart failure. The following slide provides guidelines regarding the use of RAAS inhibition based on serum potassium. It follows KDOQI, NICE (National Institute for Clinical Excellence) among others. 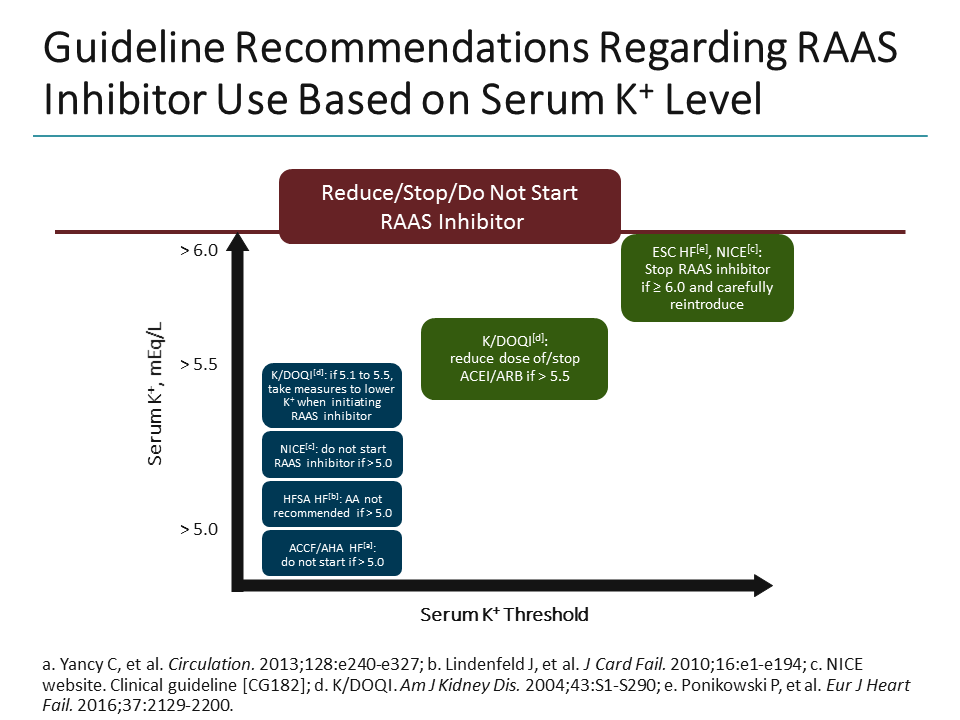 What can be done for hyperkalemia?

SPS (sodium polystyrene sulfonate) is usually premixed in sorbitol. This sorbitol is no longer recommended as it causes a high incidence of intestinal necrosis as a side effect. SPS alone is not always available and, when available, comes as a powder that must be reconstituted. It is a cation exchange resin which exchanges Na for hydrogen ions in the stomach and then exchanges the hydrogen ion for other cation in the large intestine. it reduces the serum potassium by .82 to 1.14 mEq/l depending on the dosage. However it is a bulky drug which most patients find unpleasant to drink and causes acute bowel necrosis, diarrhea, hypernatremia and gastrointestinal disturbances.

Patiromer and SZC are compared below in a slide you might find useful. 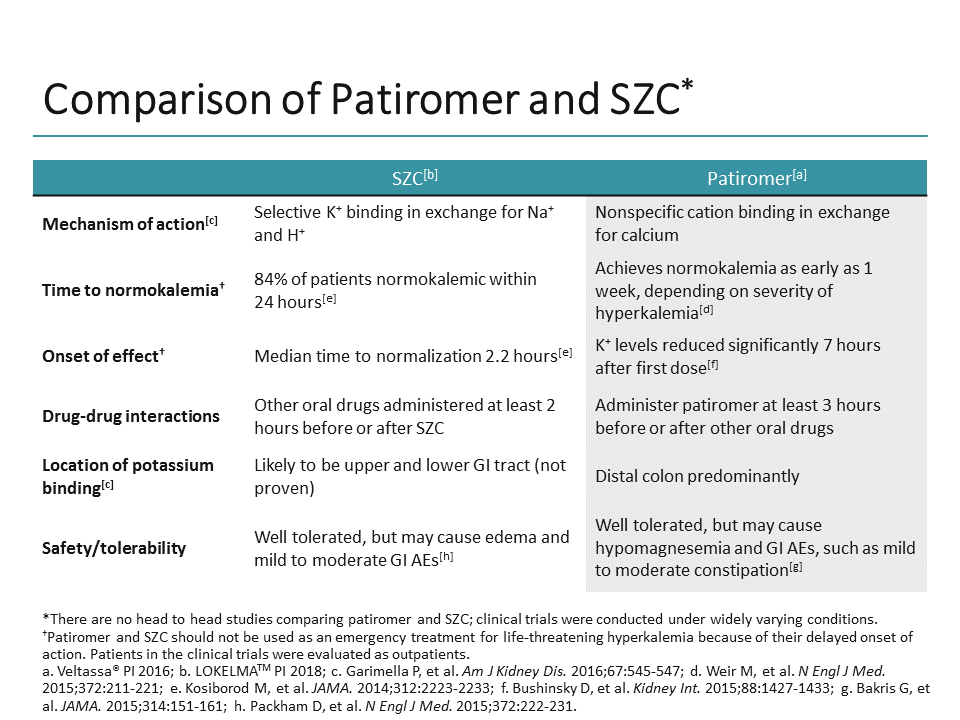 I am a Professor of Medicine and a Nephrologist. Having served in the Army Medical College, Pakistan Army for 27 years I eventually became the Dean and Principal of the Bahria University Medical and Dental College Karachi from where I retired in 2016. My passion is teaching and mentoring young doctors. I am associated with the College of Physicians and Surgeons Pakistan as a Fellow and an examiner. I find that many young doctors make mistakes because they do not understand how they should answer questions; basically they do not understand why a question is being asked. My aim is to help them process the information they acquire as part of their education to answer questions, pass examinations and to best take care of patients without supervision of a consultant. Read my blog, interact and ask questions so that I can help you more. View all posts by shaheenmoin