A 36-year-old man presents to the emergency department with sudden onset of hematemesis. He reports having vomited bright-red blood three times during the past 4 hours; the last incident occurred about 1 hour ago. He estimates that he has vomited about a half-cup (approximately 118 mL) of blood each time. He has been nauseous for several days.

He denies having any abdominal pain or any previous episodes of hematemesis; however, he states that he has had black, tarry stools and decreasing urine output for the past several days. He last urinated about 14 hours ago and he currently has no urge to urinate. Note how the history elicits the fact that his urine output has declined and when he last urinated. information about the urine output is very important in the presence of possible large GI hemorrhage.

What do the black tarry stools signify?

This means that he has been bleeding for more than 24-48 hours because it takes altered blood that long to be passed.

The significant past medical history is that he had been treated for what his doctor said was dengue fever which had lasted for 3 weeks. This had happened 2 months ago. He denies smoking, drinking alcohol, or using illicit drugs. He does not take any medications, including over-the-counter nonsteroidal anti-inflammatory drugs, and is not taking herbal supplements.  During the past 2 weeks, the patient noticed some swelling in the glands along his neck, but he had no sore throat or other complaints. He noticed a few bruises on his limbs but they have faded by now.

What is the significance of acute enlargement of the lymph nodes which fades away spontaneously, in a young man? Could this have been early symptomatic AIDS or the AIDS related complex or infectious mononucleosis? Both diseases are transmitted sexually. These diseases are unlikely to be the cause of a significant GI bleed.

Upon physical examination, the patient is ill-appearing. His temperature is 98.6° F (37°C). He has a heart rate of 120 beats/min, with a regular rhythm, a blood pressure of 100/70 mm Hg, and a respiratory rate of 16 breaths/min. The examination of his head and neck reveals conjunctival pallor. He has enlarged lymph nodes along the anterior cervical chains on both sides. His lungs are clear to auscultation. Auscultation of his heart demonstrates normal sounds. He has a soft, nontender abdomen, without appreciable masses or organomegaly. His rectal examination shows normal tone and black, guaiac-positive stool. The axillary and inguinal lymph nodes are enlarged bilaterally, and he has normal peripheral pulses.

He is showing evidence of shock from significant blood loss. His pulse is high and BP on the lower side. He is also anemic; evidence of bleeding that has been going on for some time as in a current bleed anemia or a low Hb is not immediately detected. The shock is significant because his urine output is low and he has been anuric for 14 hours so renal function has been compromised acutely. GI hemorrhage causing acute renal failure.

He is promptly given vigorous intravenous (IV) rehydration with normal saline and his urine output is monitored by using Foley catheter as he is becoming drowsy, and a CVP line is put in to monitor central venous pressure; 2 blood transfusions are given for worsening anemia, and IV ranitidine therapy is started in the ER. The patient is then admitted to the hospital’s intensive care unit for further management. The lab results confirm renal failure. What is the significance of the raised LDH, uric acid, and phosphorus? What is the significance of the serology and the complement assay testing.

The LDH, uric acid and raised phosphorus can be seen in tumour lysis syndrome. This combination together is significant together. What is the tumour that is being lysed? Immunological abnormalities can occur in hematological malignancies leading to complement activation, immune complex formation and deposition and the onset of glomerulonephritis.

After stabilization, abdominal ultrasonography is performed, which demonstrates enlarged kidneys (right kidney, 12.5 cm, and left kidney, 12.2 cm) without urinary obstruction. His renal parenchyma is hypoechogenic. He then undergoes endoscopy, which demonstrates erosive gastritis. His laboratory values improve with therapy. Multiple biopsies are then taken of his axillary and inguinal lymph nodes, bone marrow, and kidneys. The axillary and inguinal biopsies are reported as histologically reactive. His bone marrow biopsy demonstrates erythroid hyperplasia. A slide from his renal biopsy is shown below 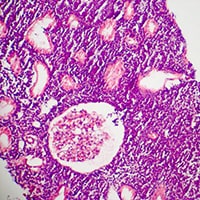 The renal biopsy,  eventually led to the underlying cause of renal failure, which was determined to be non-Hodgkin lymphoma (specifically, diffuse large B-cell lymphoma).

Diffuse large B-cell lymphoma. Hematoxylin and eosin stain of a lymph node biopsy sample showing a mixture of large and small cells. The architecture of the node is lost, with a diffuse pattern of involvement.

Non-Hodgkin lymphomas include a diverse group of lymphoproliferative malignancies that originate outside the bone marrow. These malignancies differ in many basic characteristics. Some types, such as follicular small cleaved cell lymphomas, are almost always disseminated with bone marrow involvement upon presentation, whereas diffuse large noncleaved cell lymphomas may present with disease limited to one to two lymph node areas in as many as 30% of cases.

Approximately 25% of all cases of non-Hodgkin lymphoma present at an extranodal site without systemic involvement.

The malignancies also differ in terms of aggressiveness, with some having indolent courses and others rapidly progressing.

They also differ in the type of treatment options and success rates.

Non-Hodgkin lymphomas are tumors of lymphoid tissues that have progressive clonal expansion of B cells, T cells, and/or natural killer (NK) cells. Most are of B-cell origin; those that are not are derived from T cells, NK cells, and, rarely, from macrophages. The tumors are classified pathologically by their level of differentiation, the size of the cell of origin, the rate of proliferation, and the histologic growth pattern. Among B-cell subtypes, the size of the cell and the growth pattern suggest the degree of tumor aggressiveness. Tumors that grow in a nodular pattern are typically less aggressive than those that proliferate in a diffuse pattern. Additionally, lymphomas derived from small lymphocytes often have a more indolent course than those from large lymphocytes.[1,2]

Primary renal lymphoma (PRL) as a clinical entity is controversial because the kidneys do not contain lymphatic tissue and the mechanism of development of PRLs is unclear. Most reported cases showed rapid systemic progression and a poor prognosis. Although no clearly defined diagnostic criteria are recognized for renal lymphomas, abdominal and thoracic CT scanning as well as renal and bone marrow biopsies are potentially beneficial diagnostic tools.[2,3]

Non-Hodgkin lymphoma is the most prevalent hematopoietic neoplasm and accounts for approximately 4% of cancers worldwide. The 5-year survival rate has steadily improved over the past 20 years and is now estimated to be 63%. The development of novel therapeutic strategies, such as monoclonal antibodies, validation of response biomarkers, and introduction of patient-specific treatment, are largely responsible for this significant improvement in mortality.

Evaluating patients with non-Hodgkin lymphoma starts with a careful history-taking and physical examination. Of particular importance is the presence or absence of B-symptoms. These symptoms are uncommon at the initial presentation of low-grade lymphomas, but they are present in approximately 30%-40% of those with intermediate- and high-grade disease. B-symptoms include night sweats, unintentional weight loss, unexplained fevers, and sometimes pruritus. Fatigue and generalized weakness are also more common in those with advanced disease.

Physical signs may widely vary and depend on the severity of illness at presentation. Findings include peripheral adenopathy, splenomegaly, and hepatomegaly. A large abdominal mass may be palpated in Burkitt lymphoma. Skin lesions are seen in cutaneous T-cell lymphoma (mycosis fungoides), anaplastic large-cell lymphoma, and angioimmunoblastic lymphoma. Signs such as pallor, ecchymoses, or petechiae may be suggestive of a hematologic etiology for the patient’s illness. Additionally, palpating for masses (enlarged lymph nodes, abdominal masses, thyroid masses) may be useful. Regression of enlarged lymph nodes may occur in low-grade lymphoma, which may misguide the diagnosis to an infectious cause. Over one third of patients present with extranodal disease, including involvement of the GI tract, skin, bone marrow, sinuses, genitourinary tract, thyroid, and central nervous system.

What additional studies should be done in this patient?

Initial laboratory studies in non-Hodgkin lymphomas may include a CBC count and peripheral smear, ESR, chemistry studies reflecting major organ function, and a serum LDH. HIV serology should also be considered. Additional studies that may be used include serum beta2-microglobulin (B2M); serum protein electrophoresis; CT scans of the chest, abdomen, and pelvis; gallium scan; and a bone marrow biopsy.

Imaging studies can provide anatomic information that will help determine a patient’s International Prognostic Index (IPI). This is a powerful predictor of outcome in all patients with non-Hodgkin lymphoma. The factors used to determine the IPI include age, serum LDH, performance status, Ann Arbor staging, and extranodal involvement. The IPI, combined with other factors, helps determine the patient’s treatment protocols. Treatment options are complex and may vary substantially given the patient’s functional status, age, and type of malignancy.

A rare but interesting initial manifestation of non-Hodgkin lymphoma is acute renal failure. While lymphoma involves the kidney in 30%-40% of cases if untreated, the incidence of renal involvement at initial presentation is 2.7%-6%. Mostly, it is in the form of insidious renal failure. Primary renal lymphoma is rare.

How does NHL cause acute renal failure?

Renal failure as a result of tumor lysis syndrome is often the presenting condition that leads to the diagnosis of non-Hodgkin lymphoma.

In the patient in this case, the imaging study and biopsies eventually demonstrated renal infiltration of his lymphoma. The fractional uric acid excretion of < 1 meant that decreased renal elimination, rather than increased production of uric acid from a tumor lysis syndrome, likely caused the elevated uric acid levels. Due to the patient’s impaired renal function, allopurinol, which undergoes renal elimination, was not initially administered. Instead, the patient underwent hemodialysis.

After hemodialysis was discontinued, allopurinol was dosed on the basis of the patient’s glomerular filtration rate. A chemotherapy protocol of cyclophosphamide, doxorubicin, vincristine, and prednisone was started with renal dosing. The patient was observed for worsening tumor lysis syndrome following chemotherapy. Hemodialysis was used regularly. Eventually, the dose-adjusted chemotherapy led to renal function improvement, with a serum creatinine level of 1.7 mg/dL (150.28 µmol/L) and diminished renal size (right kidney, 12 cm, and left kidney, 11.5 cm).

The patient was discharged in good condition but, unfortunately, he died 2 months later as a result of dissemination of the large B-cell lymphoma, including extensive bone marrow involvement.

I am posting the link for this article.

I am a Professor of Medicine and a Nephrologist. Having served in the Army Medical College, Pakistan Army for 27 years I eventually became the Dean and Principal of the Bahria University Medical and Dental College Karachi from where I retired in 2016. My passion is teaching and mentoring young doctors. I am associated with the College of Physicians and Surgeons Pakistan as a Fellow and an examiner. I find that many young doctors make mistakes because they do not understand how they should answer questions; basically they do not understand why a question is being asked. My aim is to help them process the information they acquire as part of their education to answer questions, pass examinations and to best take care of patients without supervision of a consultant. Read my blog, interact and ask questions so that I can help you more. View all posts by shaheenmoin